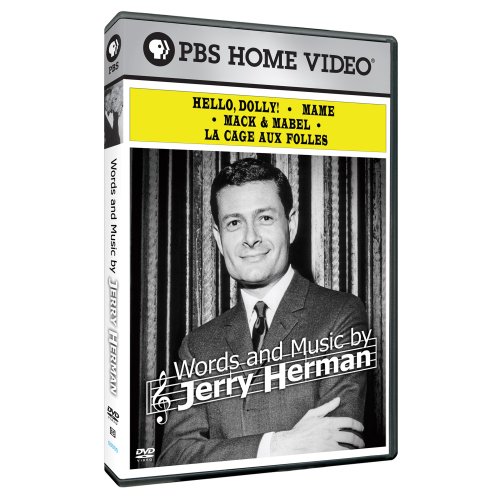 WORDS AND MUSIC is the story of one of Broadway's iconic figures: the composer/lyricist of Hello, Dolly!, Mame and La Cage aux Folles. Jerry Herman and an all-star cast, from Carol Channing to Angela Lansbury to Michael Feinstein, chart his rise from 1950s off-Broadway through all of his smash hits. Featuring never-before-seen footage of original stage performances, and a score full of classic show tunes.

"Words and Music by Jerry Herman," Amber Edwards' delightful documentary, celebrates the life and talent of the gifted composer-lyricist who won Tonys for the scores of Hello, Dolly! and La Cage aux Folles.

Extras on the DVD (a New Year's Day release on PBS Home Video) will include Carol Channing performing the complete title song of Hello, Dolly! at the White House for President Lyndon B. Johnson; "Dancing Shoes," from Herman's 1955 college musical; and "Before the Parade Passes By," performed by Herman and Merman Ethel's last stage appearance was as Broadway's seventh (and final) Dolly.

Words and Music by Jerry Herman is Amber Edwards' fantastic new documentary film about one of the musical theater's most beloved composer-lyricists. It traces Herman's rise from crafting Off-Broadway revues in the 1950s to his Broadway triumphs with such shows as Hello, Dolly!, Mame, and La Cage aux Folles, and it also covers such disappointments as Dear World, Mack amp; Mabel, and The Grand Tour.

The doc is scheduled to be aired by PBS in New York on December 31 and nationwide on January 1, but if you pre-order it now through Amazon.com, you might get hold of it a few days earlier. It features interviews with such stars as Carol Channing, Angela Lansbury, Charles Nelson Reilly, and George Hearn, but the most stunning thing about the movie is its inclusion of archival color footage of the original productions of Dolly! and Mame, painstakingly synched-up with full stereo audio from the original cast albums of those shows.

Words and Music by Jerry Herman is an invaluable time capsule and a worthy tribute to a man who holds a major place in Broadway history. --by Michael Portantiere, BroadwayStars.com

Don't forget to upgrade your browser

This browser is not supported.
Download the latest browser below to get the best possible experience.

Wherever Kids Learn This Year, We're Here for You

Raise Funds for Class with ClassroomsCount™

START A CAMPAIGN
for educators

Get Set for Back to School

Josephine Against the Sea

Get kids excited for the year with skill-building resources and fun, relatable reads about the joys of Kindergarten

Just in Time for the New School Year

Expand your book collections with titles selected by teachers.

Inspire literacy and learning for all students with our comprehensive solutions