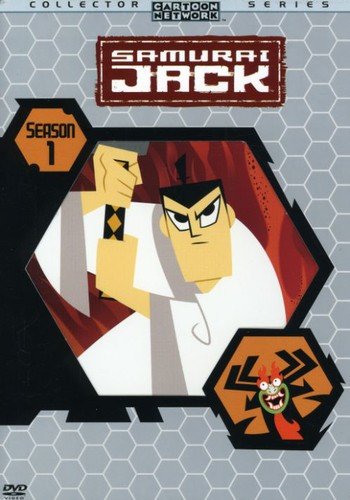 From Genndy Tartakovsky, creator of Dexter's Laboratory, comes the tale of a young samurai cast far into the future by the evil shape-shifting wizard Aku. Join Samurai Jack on his quest to return to the past and undo the destruction that Aku has wrought upon the land. With award-winning artwork and intricate, action-packed plots, the many journeys of Samurai Jack are a must for any fan's collection. DISC 1: Episode I - When Aku is reborn to set forth his reign of terror, a young samurai attempts to slay him with a mighty sword. But Aku banishes the warrior to the future. Episode II - After landing in the future, the samurai, now named Jack, begins his quest for Aku. Episode III - Jack attempts to beat back Aku's army and save a race of canine archaeologists. Episode IV - Jack helps free the Woolies from the tyrannical Chritchellites. Episode V - Jack and a group of scientists join forces to try and escape the wrath of Aku. Episode VI - A mysterious warrior woman joins Jack in his quest, but is she really an ally? Episode VII - Jack must get past three mysterious archers to reach an all-powerful wishing well. DISC 2 Episode VIII - Jack must do battle with his darker self, Mad Jack. Episode IX - Jack has an underwater adventure while hunting for an ancient time portal. Episode X - Jack survives a cave full of challenges before doing battle with a feared lava monster. Episode XI - When Jack and a Scotsman meet on a never-ending bridge, they end up shackled together and on the run from bounty hunters. Episode XII - Jack hooks up with some Chicago gangsters to try and get close to Aku. Episode XIII - Aku tells three fairy tales, with a decidedly skewed point of view, to the children in order to win them over to his side.

When Samurai Jack burst onto the small screen in 2001, it introduced a boldly imaginative visual style to the often dreary realm of television animation. Other series have tried to imitate the flattened, angular graphics pioneered by the UPA studio during early '50s. Samurai Jack succeeds in recapturing the essence of the UPA shorts because creator Genndy Tartakovsky and his artists understand that these highly stylized visuals require equally stylized movements.

The ongoing battle between heroic Jack and the evil shape-shifter Aku simultaneously evokes and spoofs the conventions of anime and Western live-action film. Long ago, Jack nearly destroyed Aku in a duel; in desperation, the wizard hurled the samurai far into the future, where Aku's word is law. Jack fights robots, monsters, bounty hunters, etc. as he seeks to return to his own time, so he can prevent Aku's rise to supremacy.

The writing is sometimes uneven, but even when the material feels weak, the visual imagination never falters, from the flamboyant character designs to the use of split-screen. The filmmakers stage the quiet moments as skillfully as the action sequences, and Samurai Jack offers more exciting storytelling than many big-budget animated features. (Unrated: suitable for ages 10 and older: stylized violence, occasional profanity) --Charles Solomon

Letter from The Growler’s Founder and Publisher Matt Kenevan

Roundhouse Brewery has been brewing beer in Brainerd since April 2016, but a move last summer saw the railroad-themed brewery chugging down the line … END_OF_DOCUMENT_TOKEN_TO_BE_REPLACED

The Luce Line State Trail is a popular spot for bicycling, jogging, or even cross country skiing. While it’s nice to sip some water after an intense … END_OF_DOCUMENT_TOKEN_TO_BE_REPLACED

Roger Warehime remembers the first time he toured an old, city-owned building in Owatonna, Minnesota, with a painted sign on the brick exterior … END_OF_DOCUMENT_TOKEN_TO_BE_REPLACED

After Nutmeg Brewhouse closed in Burnsville, the space was quickly filled with the smell of hops and malt once again as Ineffable Brewing Co. made its … END_OF_DOCUMENT_TOKEN_TO_BE_REPLACED

Bite of the Week: Puerco Pibil at Nixta Tortilleria

Bite of the Week is a weekly feature showcasing an exceptional meal or dish, curated by The Growler. We’d like to thank Dual Citizen Brewing Company … END_OF_DOCUMENT_TOKEN_TO_BE_REPLACED

Bite of the Week is a weekly feature showcasing an exceptional meal or dish, curated by The Growler. We’d like to thank Dual Citizen Brewing Company … adidas outdoor Terrex AX3 GTX

Bite of the Week: Fried Chicken Bao at Dumpling

Bite of the Week is a weekly feature showcasing an exceptional meal or dish, curated by The Growler. We’d like to thank Dual Citizen … END_OF_DOCUMENT_TOKEN_TO_BE_REPLACED

Cooperative Evolution: Food coops like Seward and the Wedge have adapted quickly during troubled times

Access to food is about as elemental as it gets. But in troubled times with lives on the line, not every grocery store has responded to the pandemic … END_OF_DOCUMENT_TOKEN_TO_BE_REPLACED

Field of Dreams: CBD hemp farmers like Patrick Finnegan of Two Harbors are changing the face of Minnesota agriculture

This story is a part two of a two-part series on CBD and hemp underwritten by J.C. Younger. The Growler maintained editorial control over the content. Afew hours north of Minneapolis–St. Paul, a hockey player-turned-CBD hemp farmer named Patrick … END_OF_DOCUMENT_TOKEN_TO_BE_REPLACED

This story is a part one of a two-part series on CBD and hemp underwritten by J.C. Younger. The Growler maintained editorial control over the content. We wanted to be the Summit Brewing Company of the cannabis industry in Minnesota," says Josh … END_OF_DOCUMENT_TOKEN_TO_BE_REPLACED

Brian Geihl is no stranger to working through changes. He has been passionate about creating art and drawing all his life, but when he started at St. Cloud State University, he wasn’t in the studio right away. Following his love for the outdoors, he … END_OF_DOCUMENT_TOKEN_TO_BE_REPLACED

‘Let the Saloons Come’: When Fargo went dry in 1890, liquor ruled in Moorhead

For 25 years, between 1890 and 1915, Moorhead, Minnesota, was infamous for being a rough and rowdy saloon town. The reputation was well deserved, as alcohol sales were the city’s number-one industry. Since the arrival of the first … END_OF_DOCUMENT_TOKEN_TO_BE_REPLACED

Tracks From The Vaults

Cultivating the craft lifestyle through storytelling that inspires progress in the communities of food, drink, arts, and the outdoors.

Via @beerdabbler: Dabbler in a Box - Season 6 is a
Some of your old friends from The Growler are help
The cover for our new “Bars” issue was created
Our July special issue also features our 2020 Outd
Load More... Follow on Instagram